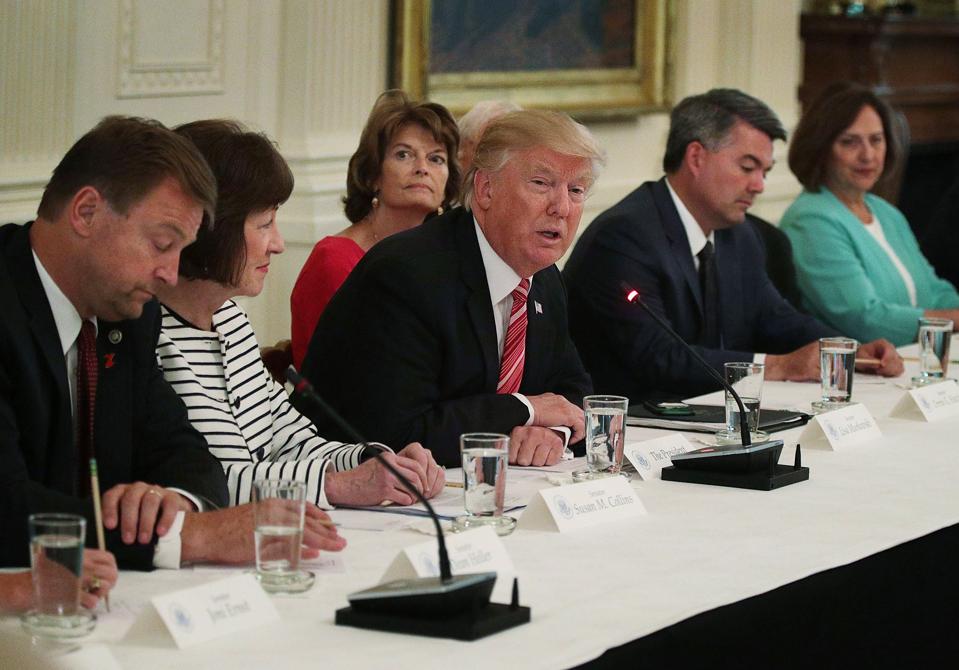 Republican senators Susan Collins and Lisa Murkowski flank Donald Trump at a White House meeting on Obamacare repeal. Both voted against all the repeal measures the Senate debated. (Photo by Alex Wong/Getty Images)

To be sure, Mark Aseltine was never going to vote for Donald Trump. Aseltine lives in deep-blue Berkeley, California; he’s married to an immigrant from Central America. And yet as Trump took office, Aseltine came to believe that it might not be a total loss: a Trump administration might just be good for his business.

Aseltine, who is 37, runs Uncorked Ventures, a wine club that he started with his brother-in-law in 2010. The company has grown steadily; sales last year, at $500,000, were 10 to 15 percent higher than the year before, and Aseltine employs two other people. This year, he’s noticed a Trump Effect in his sales. “Much like the stock market has gone up, our average ticket price has gone up,” he says. “My highest end wine club is $225 a shipment, and that’s two or three bottles, so you’re talking about $75-$100 a bottle, on average. You’re dealing with a very specific consumer. And they’re benefiting from the stock market going up.”

Like many entrepreneurs, Aseltine hoped that Trump and the Republican congress might lower his taxes. But he also had a more specific hope. “Regulations in the wine industry are stifling, to put it mildly,” he says. “Often the states that are most ardent in regulation are the most conservative. They’re generally not producer states, and they’re influenced by the distributors.” Yet Trump, too, is in the wine business — he of course owns a winery (with hotel)near Charlottesville, Virginia. “I was hopeful after the convention, especially after they had the manger of the Trump Winery speak, that they would notice how stifling the regulations were.” (Eric Trump is president of the winery.)

“We weren’t set up to be his bigger supporters,” says Aseltine. But “in January I was actually quite hopeful that something would get done. There was something very appealing about lower taxes. For someone who started a small business it’s even more appealing, because you risked your finances and your time.”

Six months into the Trump presidency, however, Aseltine has concluded that he’s got the worst of both worlds: a president with views on social issues that he finds abhorrent but also unable to enact his more promising economic agenda. His disenchantment echoes a broader trend among small-business owners noticed by Manta, the online marketing company. A January poll of owners found that over two-thirds believed that the Trump administration would positively affect their business. But by July, that number had fallen to one-third.

In the January poll, 69 percent of business owners believed, like Aseltine, that Trump would follow through on pledges to deregulate the economy and reform corporate taxes. But by July, only a slight majority actually supported Trump’s tax plan. Healthcare saw an even starker reversal of fortune. At the beginning of his administration, 63 percent of small-business owners said they wanted to see the Affordable Care Act repealed and replaced; 37 percent did not. In July, the margins were exactly reversed: 63 percent opposed Republican repeal plans.

(The polls are conducted online at Manta’s homepage — consider this a caveat, since analysts consider these types of polls generally less reliable.  In both the January and July surveys, about half of the respondents said they voted for Trump — 52 percent in January and 48 percent in July. Only a quarter of the July respondents claimed to have voted for Democrat Hillary Clinton.)