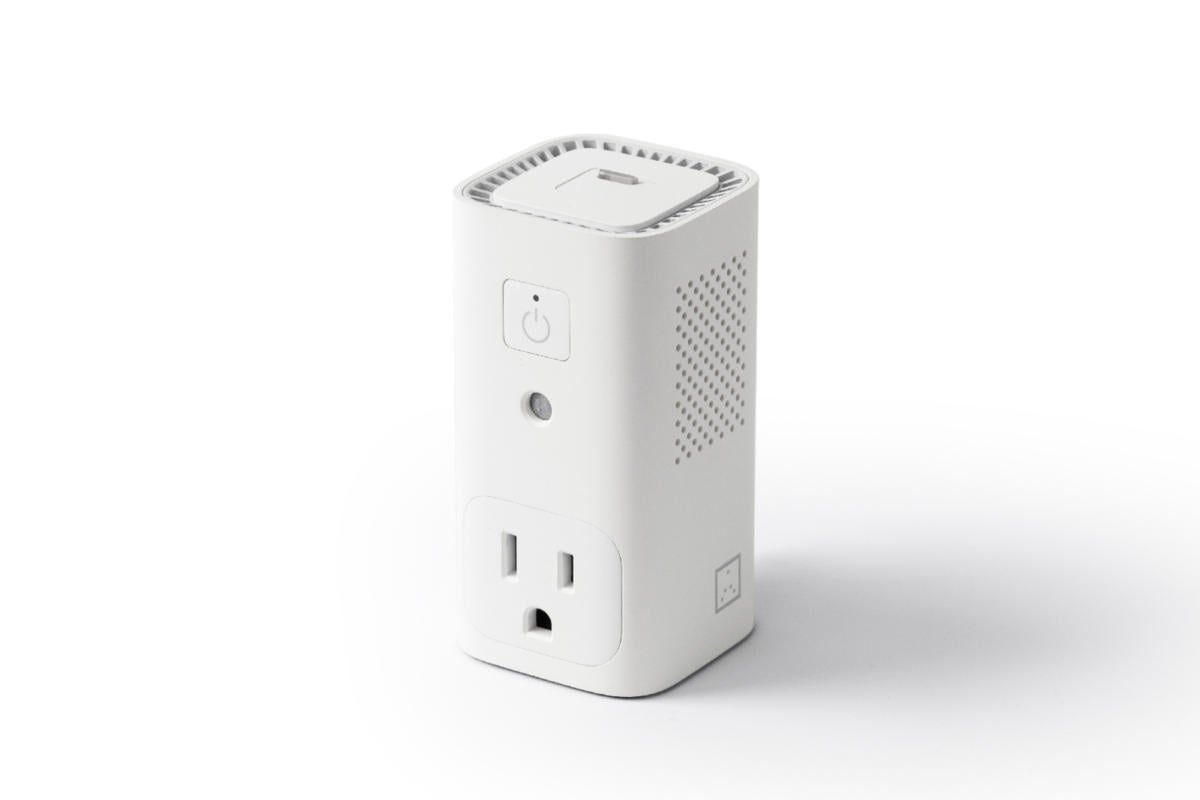 The Awair Glow C is a successor of sorts to the Awair Glow, a small air-quality monitor that also acts as a smart plug to automate “dumb” appliances in response to changes in air quality. That said, the new features on offer—the ability for users to customize the colors of its LED to transform it into a nightlight—seem minor in comparison to what remains the device’s core function: Not just monitoring, but improving the quality of the air within your home.

The Awair Glow C looks nearly identical to the older Awair Glow, with a couple of cosmetic changes: The earlier model’s touch-sensitive wood-grain pad and light strip have been replaced with a square LED light that does double duty as an air status indicator and a nightlight. Also, a removable plastic cover has been added to the three-prong AC outlet built into the front, adding a level of child safety.

Like its predecessor, the Glow C uses a color-coded system to rate your overall air quality, as well as the individual factors that influence it: green is good, yellow is fair, and red is poor. You can get an at-a-glance status of your overall air quality from the device’s LED. But pairing it with the Awair app on your smart device provides much deeper insights.

When you connect the Glow C to the app, you’re prompted to choose from several monitoring preferences: “General” emphasizes comfort; “Allergy” tracks irritants, such as dust and chemicals; “Sleep” optimizes for nighttime rest; “Baby” ensures temperature and humidity are kept at an ideal level in your child’s nursery; and “Productivity” promises to “help you stay at the top of your game,” although it doesn’t explicitly say how it accomplishes that mission.

The app’s main screen displays an overall numerical air-quality score that corresponds to the good-fair-poor color code (and the device’s LED). Beneath that is a breakdown of the factors that influence air quality: temperature, humidity, and chemicals (i.e. volatile organic compounds, or VOCs). Awair products have always been very accurate in my testing, and the Glow C is no different—its temperature and humidity readings were consistently close to those of my indoor thermometer and hygrometer.

The Awair app also tracks fluctuations in your air-quality scores and contributing factors over time. These are displayed on a simple line graph on a separate tab, but you’ll need to run the Glow C for a week or so before you get any meaningful data. A separate Tips tab provides recommendations for improving your air quality—turning on your AC to lower the indoor humidity, for example.

Smarten you your dumb appliances

If that’s all the Glow C did, it would be a solid air-quality monitor, but not all that different from a host of similar products. What continues to set Awair’s device apart is its ability to automate an assortment of conventional appliances, including fans, heaters, and humidifiers. You need only plug the appliance into the front of the Glow C, select that type of device in the app, and choose whether you want the appliance powered up based on air-quality changes, a schedule, or motion.

As we’re in the height of summer, I initially connected the Glow C to a fan and set it to turn on any time someone entered the room. Later, I plugged in a Honeywell air purifier and set it to be triggered if the chemicals level reached a level of 350ppb (parts per billion). Finally, I used the Glow C with a dehumidifier to keep indoor humidity around 50 percent. In each of these cases, I could see the respective levels drop soon after the appliance was activated.

You can extend the Glow C’s power even further by integrating it with a host of popular smart home services and systems, including Google Home, Amazon Alexa, and Wemo. In many cases, the connection is facilitated through an IFTTT applet, but you can also turn devices on directly from within the Awair app.

The Glow C adds the ability to control the color emitted by the motion-triggered nightlight. This “ambient mode” feature is accessed through the app’s setting menu. You can select a hue from a color wheel and adjust its saturation and brightness to create your own custom illumination. It’s not a game-changing feature, but it’s a nice touch if you’re a fan of mood-enhanced smart-home scenes.

The original Glow’s ability to monitor air changes and activate non-smart appliances in response earned it our Editors’ Choice award in its category. Because that remains the main proposition of the Glow C—and the fact it’s being offered at a launch price of just $75.00 on Awair’s website—we’re compelled to give it our top recommendation as well.