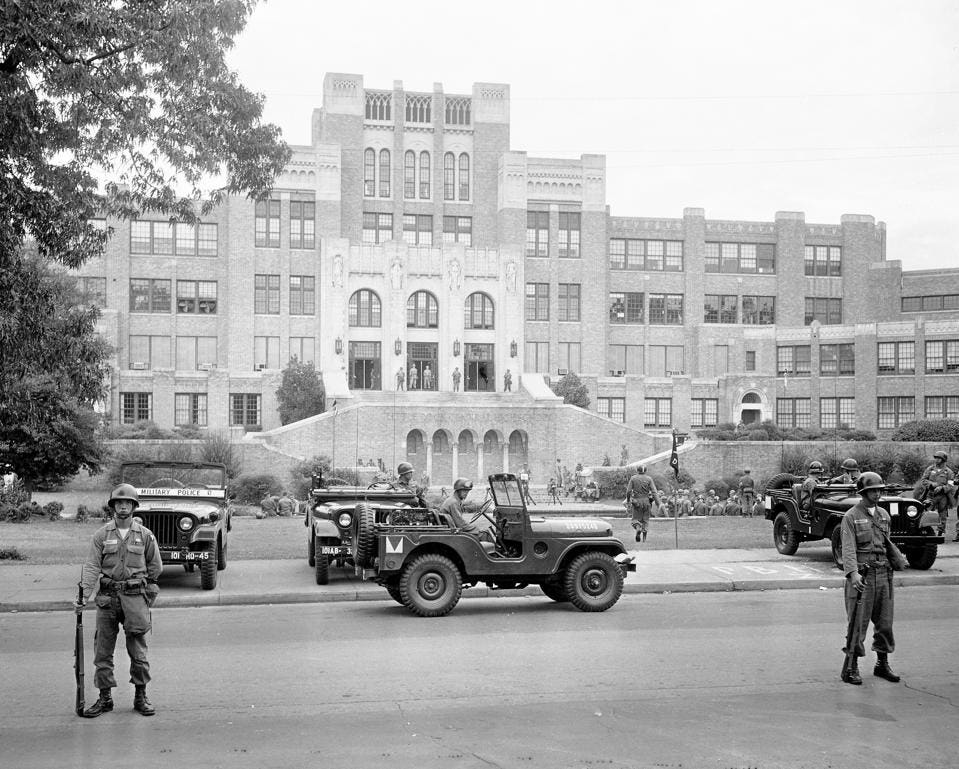 FILE – In this Sept. 26, 1957, file photo, members of the 101st Airborne Division take up positions outside Central High School in Little Rock, Ark., after President Dwight D. Eisenhower ordered them into the city to enforce integration at the school. Photocredit: ASSOCIATED PRESS

Towards the end of last week, there was big news about two basic, conflicting methods of delivering education, news that could herald the arrival of a crucial, clarifying debate about American education: Should families or government decide where children are educated? It is a debate, as long as it is conducted with magnanimity, that all should welcome, focusing on basic questions of justice for past wrongs, and how education in a free country should work.

Both of the major stories revolve around policies intimately connected to discrimination in American education. The first concerns “busing,” a term that captures policies, especially in the 1960s and 70s, that assigned students, based on race, to schools outside of largely homogeneous neighborhoods to help overcome centuries of oppression and segregation of African Americans. The issue, after lying dormant for decades, was thrust into national headlines by Thursday night’s Democratic presidential debate. Sparking it was a contentious exchange between former Vice President Joe Biden and Sen. Kamala Harris over Biden’s opposition to federal busing proposals in the 1970s.

The second big story was the U.S. Supreme Court agreeing to hear Espinoza v. Montana Department of Revenue, a case about a scholarship tax credit program invalidated by the Montana Supreme Court because it allowed parents to use scholarships, for which funders received tax credits, at religious schools. The Montana court decided that allowing students to access religious schools violated the state constitution’s Blaine Amendment, often interpreted as a “wall” between church and state higher and thicker than the federal First Amendment. Such amendments had their genesis in long and deep sentiment against Roman Catholics, who sought public funding for their own schools because the public schools were often de facto Protestant, featuring readings from Protestant versions of the Bible and sometimes anti-Catholic content.

Today, the concern is that Blaine amendments force government discrimination against all religion, allowing government to fund secular choices while rendering religious choices off limits.

Both of these issues are about discrimination, but in very different ways. Busing is about government bringing people together, after centuries of forced separation. Battling Blaine is about letting people be apart instead of coercing uniformity.

They raise fundamental questions: What role should government play in bringing people together? Allowing separation? Making up for past injustice?

While fundamental, these are also dangerous questions, conducive to demagogic attacks on people’s motives and attitudes: You hate religion! You are racist! You don’t care about injustice!

If the compulsion-versus-choice debate is to be positive—not just another social-fabric-shredding battle for political supremacy—all must overcome the powerful urge to beat, rather than productively engage, their intellectual opponents. They must endeavor to understand others’ perspectives rather than hang loaded labels on them. They must listen more than talk, and consider viewpoints they may even find hurtful by contemplating how a rational, decent person might arrive at them.

It can be done.

I strongly support school choice, but it is impossible to know American history, including very recent history of discriminatory housing, and not understand urgent calls for compelled integration. Children are suffering from its effects today, and busing essentially says we can’t wait any longer to ameliorate centuries of national sin. I am also Catholic, but understand why people worried about Catholics, especially the possible influence of the Catholic Church. The Church certainly had a track record of involving itself in countries’ political affairs.

Of course, there are morally upright reasons to oppose busing and support school choice. Many families, African-American and white, have opposed busing because they have not wanted their children traveling long distances to and from school, or they have valued the community cohesion of neighborhood schooling. Choice can be embraced by people who, directly related to Blaine, want their children taught their religious values, or not taught things in opposition to them, without having to pay twice for education. African-Americans may want the option of Afrocentric schools, or just schools where they are the majority and control what the schools teach. And some people may simply prioritize the good of liberty over the good of racial integration.

In the next year, our national education debate may well revolve around two fundamentally different modes of education provision: government control and parental choice. But just because the policies are starkly different doesn’t mean those taking one side must be good and the other evil. Good people, for fine reasons, can come out on both sides. If we want this coming debate to help rather than hurt us, we must treat each other accordingly.