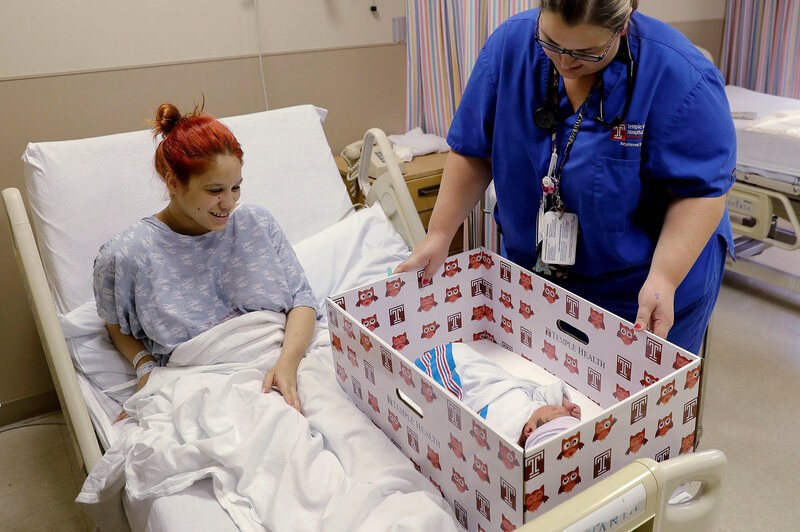 Keyshla Rivera smiles at her newborn son Jesus as registered nurse Christine Weick demonstrates a baby box before her discharge from Temple University Hospital in Philadelphia in 2016. All mothers who deliver at the hospital receive a box, which functions as a bassinet, in an effort to reduce unsafe sleep practices.

Giving new moms face-to-face education about safe sleep practices — and providing them with a cardboard “baby box” where their newborns can sleep right when they get home — reduces the incidence of bed sharing, a significant risk factor for SIDS and other unexpected sleep-related deaths, a study from Temple University in Philadelphia has found.

The study is the first to show that a face-to-face education program, coupled with the distribution of baby boxes — which come with a firm mattress and fitted sheet — help reduce risky sleep habits. The program reduced the rate of bed sharing by 25 percent in the first eight days of life; among exclusively breastfed babies, who are at higher risk of bed sharing, the study found a reduction of 50 percent.

“We wanted to measure the immediate effect of our teaching,” says Dr. Megan Heere, medical director of Temple University Hospital’s Well Baby Nursery and the lead researcher on the study, which was presented earlier this month at the Pediatric Academic Societies Meeting.

Baby boxes, a component of the study, have been all the buzz lately, with some states providing them for free to new mothers. But according to the American Academy of Pediatrics, there is insufficient data on the role the cardboard containers play in reducing infant mortality. The study by Temple focused on safe sleep education in conjunction with the distribution of baby boxes and did not address the effectiveness of baby boxes alone.

The study was based on phone surveys with 2,763 new mothers within 72 hours of their discharge from Temple University Hospital. Mothers in the control group received standard postpartum education at the hospital from nurses, which included topics such as shaken baby syndrome, car seat safety, umbilical cord care and safe sleep.

In the control group, 6.3 percent of mothers reported bed sharing – “just after we told you, ‘Don’t sleep with your baby,” Heere says.

For the intervention group, all of the safe sleep material — based on AAP guidelines — was removed from the standard educational script. Instead, specially trained nurses had face-to-face, individual discussions with mothers and other family members about the points of safe sleep — such as putting a baby to sleep on her back on a firm mattress with a tight-fitting sheet and nothing else, and sharing a room but not a bed with a baby — shortly before discharge from the hospital. The sessions usually last 10 to 20 minutes, but often go longer.

“Parents … want the information, they want to do what’s best, and when it’s presented in this way, it’s not, ‘Let’s rush, rush, out the door, here’s the education and now you can go,'” Heere says. “It’s a nice, sit-down discussion.”

“Having the family members there is great, because you can dispel a lot of myths,” Heere continues. “Grandma thinks, ‘I put her on her belly, she should put her baby on her belly.’ So there’s a lot of discussion of why [sleeping on the back] back is best, and stuff like that. The whole family gets the message.”

Mothers who received face-to-face education reported a bed-sharing rate of 4.7 percent; among exclusively breastfeeding mothers, the rate of bed sharing dropped to 5.9 percent from 11.3 percent. The national rate of bed sharing is 11.2 percent of parents with infants 7 months and younger, according to the National Infant Sleep Position Study.

Another question the study hoped to answer was whether parents would actually use the baby boxes. Although they’ve been used for decades in Finland, the products have only recently gained popularity in the U.S.

“That’s what everybody said to us. They said, nobody’s going to put their baby in a box,” Heere says. “And I can tell you now that the majority of women put their baby in the box, and 12 percent of them put them in the box as the first sleeping space. That was very nice to see.” 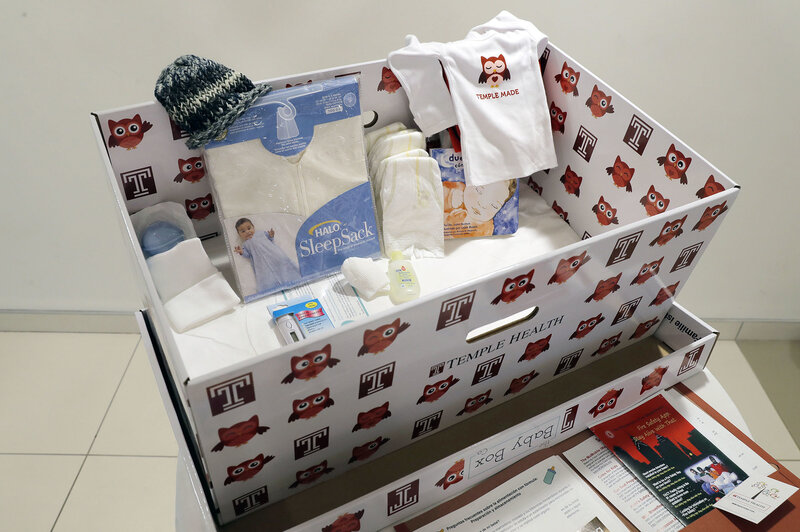 Heere acknowledges the skeptics who question the product’s safety.

The findings from Temple’s small-scale study are just the beginning. They show positive outcomes for the immediate short term, but the risk of SIDS and other unexpected sleep-related deaths peaks between two and four months of age, and declines after six months.

“Clearly, this needs to be studied over months,” Heere says, “and that’s our next plan in the upcoming year, to follow up … to see the sustainability of the effect at three and six months.”
[“Source-ndtv”]