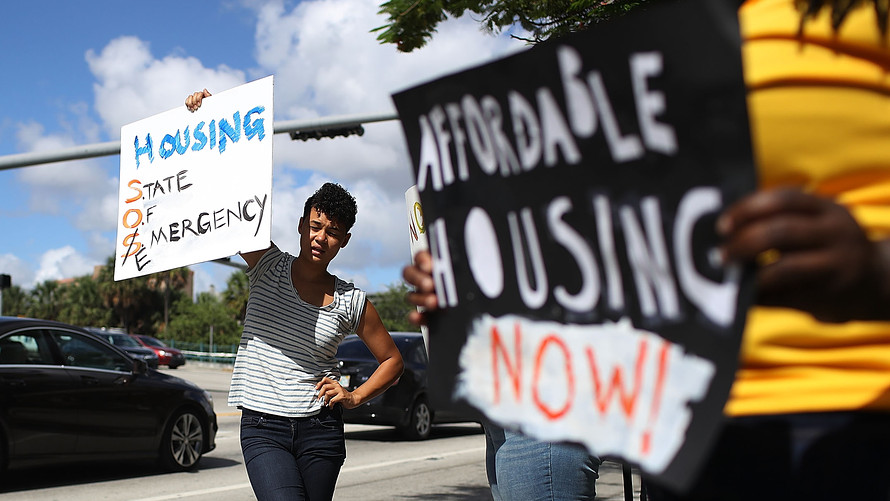 Indeed, King frequently advocated for a fairer housing system in the U.S.; for example, delivering a speech in Chicago in 1965 in which he decried segregated housing policies. He even moved his family into a segregated Chicago tenement to shed light on housing inequality.

King understood the intersection between economic issues and housing. He gave his iconic “I Have a Dream” speech in August 1963 at the March on Washington, advocating for jobs, freedom and justice. Throughout his remarks, he invoked financial metaphors, stating that African-Americans had come to “cash a check” that promised all Americans “the riches of freedom and the security of justice.” That check, King lamented, had been marked “insufficient funds” when it came to African-Americans, despite the “great vaults of opportunity of this nation.” King was laying bare the systemic challenges and inequities facing people of color in the United States.

In 2020, more than half a century after the passage of the Fair Housing Act, many of these challenges remain. Here are four ways Americans acting together can help to curb discrimination and improve fairness in the nation’s housing system.

All too often, housing discrimination goes unreported, as many who face these challenges feel there’s nothing they can do, or they fear retaliation. But such discrimination is illegal, and we should all be on the lookout for unfair practices. As Dr. King cautioned, “justice too long delayed is justice denied.” Anyone can and should submit a fair housing incident to the National Fair Housing Alliance, which monitors and tracks these events. By reporting an instance, you will help to illuminate the extent of discriminatory practices, which will guide practitioners and regulators to rectify these problems.

3. Improve credit score modeling: About 55 million Americans are unbanked or underbanked. According to the FDIC, some 25% of U.S. households fall into one of these categories. People of color comprise a disproportionate percentage of this population. Millions of Americans live in “credit deserts” where the only form of lending they can access include pay-day and higher-cost lenders.

Even if a borrower repays a loan to one of these lenders, it can still negatively affect their credit score, having sought such a lender in the first place. Moreover, timely payments to some of these entities are not reported to credit reporting agencies, so consumers accessing these sources can be “credit invisible.”

Mortgage companies and other financial services institutions, including Freddie Mac and Fannie Mae, need to use thorough and even alternative credit score data and/or models that take in a range of credible factors to determine a borrower’s intention and capacity to repay. For example, rental housing payments and Form 1040 Schedule C (for sole proprietors) could be included in assessing a borrower’s credit.  Mortgage firms ought to take a closer look at those to whom they’re declining credit to see if there’s a responsible way to approve borrowers.

4. Create private-public partnerships: Executives at financial institutions and those who lead mission-driven (non-profit) organizations can partner in raising visibility on key issues. This could be through holding meetings, seminars, or writing joint comment letters or op-eds that call for necessary reforms.

Dr. King had a dream of a fair housing market that works for all Americans. To help achieve that dream, it’s important for those who work at financial institutions to take their fiduciary responsibilities seriously and serve as counselors to customers. It’s also important for financial institutions to support effective non-profit counseling organizations that have proven to be a viable resource to underserved consumers. The National Fair Housing Alliance has developed resources from brochures (in multiple languages) to public service announcements that help educate consumers and industry professionals on fair housing issues.